After days of demonstrations in Dallas and nationwide regarding the death of George Floyd at the hands of police in Minneapolis, two Dallas ISD officials weighed in on what one said is a “community in pain.”

In a statement released Tuesday, Dallas ISD superintendent Michael Hinojosa acknowledged that “Dallas has experienced its share of injustice and inequity that has damaged relationships between white, black, and brown communities and institutions designed to serve them, including the police and even schools.”

“Conscience requires that those in power speak out against racism and prejudice and act to redress them,” he continued. “Our students and families are among those who have taken to the streets of Dallas to protest these ills. We join with them in declaring that the status quo of indiscriminate and violent over-policing of minority communities is an affront to human rights that can no longer be accepted.”

Hinojosa said that the district’s Racial Equity Office will soon launch a series of community conversations to help the district further hone in on services that can create change for its students, saying that the demonstrations are also serving as a “clarion call” to district leaders, teachers, and staff to “devote ourselves and all available resources to rebuilding this broken trust.”

Dallas ISD school board president Justin Henry also released an impassioned statement about what racial equity means to the district and the community.

Henry called on his fellow board members to denounce the systemic injustices that have been present in the city and in the district – now and historically.

“Our Board must call out and take ownership of these injustices in order to address the deep-rooted, structural racism in our society,” he said.

Henry said the matter was deeply personal for him, but that the the time for incremental change was past. “We must demand the change we want to see,” he said. “But, we cannot stop there. We must also be that change.”

You can read Henry’s letter below. To read Hinojosa’s full statement, click here. 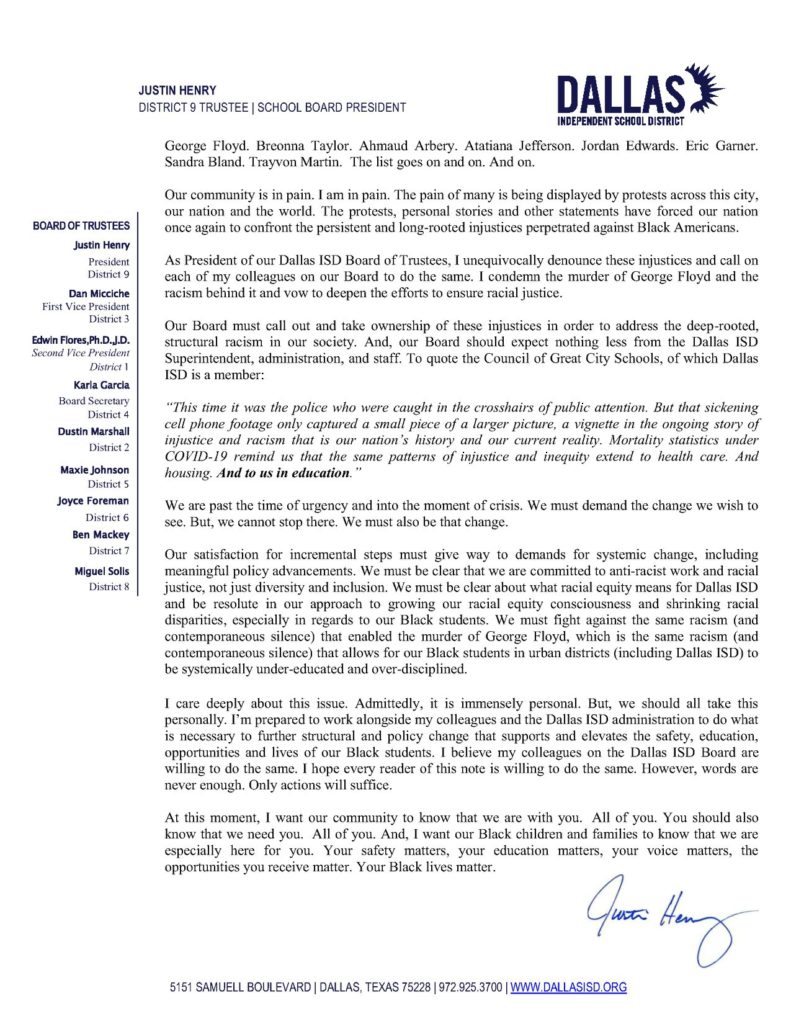