On April 17, the Highland Park girls soccer team was supposed to be at the Class 5A state tournament in Georgetown, as the defending champion and favorite to repeat.

Instead, the Lady Scots — who hadn’t shared a field in more than a month due to ramifications of the COVID-19 pandemic — met online to share some somber news. Their suspended season would not resume.

“It might have been one of the hardest things I’ve had to do as a coach — tell 14 very talented seniors that their high school careers were over,” said HP girls soccer coach Stewart Brown. “But the girls love each other and huddled around each other. What you get out of being a high school athlete is the friendships you create and the journey you get to share.”

Athletes in soccer, baseball, softball, lacrosse, tennis, golf, track, and other sports shared in the disappointment of the unprecedented cancellation of all spring sports. Dozens of graduating seniors will forever wonder what might have been.

“It might have been one of the hardest things I’ve had to do as a coach — tell 14 very talented seniors that their high school careers were over.” -Stewart Brown 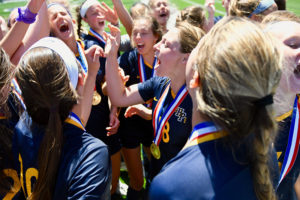 “Your heart breaks for these seniors who didn’t get any closure. They missed out on so much,” said HP baseball coach Travis Yoder. “You can’t fathom what they’re going through.”

Yoder’s squad featured 16 seniors whose final year didn’t even reach the start of district play by the time it was cut short in mid-March. That experience had HP anticipating another postseason run.

“You can do as many Zoom meetings as you want, but the face-to-face interaction and the competition is what the kids need. They need that escape,” Yoder said. “They’re handling it better than some adults are. Their true character and integrity is coming out because of how they’re responding to this.”

HP coaches and fans have tried to creatively honor the seniors by decorating house doors and creating virtual baseball cards on Twitter. A senior video is in the works, too, and they hope to gather physically at some point later this summer.

“For the majority of our players, there is no next year,” Yoder said. “They deserve to be recognized, and we’ve made a point of doing that.”

Many of the players on HP’s soccer roster experienced the triumph from the 2019 title. Still, they were well-positioned to earn a second consecutive crown for the first time in the program’s illustrious history.

Instead, they held a virtual team banquet where each player wore their uniform one last time, sharing the memories that they’ll carry with them forever.

“Their seasons with Highland Park have been some of the most successful,” Brown said. “Our junior class this year will want to go forward and do some great things in honor of this senior class. We will use their disappointment as motivation to play every game like it’s your last.”