When your family legacy involves playing and coaching football at the highest levels, it’s a question any youngster would hesitate to ask.

In seventh grade, while struggling on his school’s “C” team, Peyton Dooley mustered up the courage and approached his father: “Can I play tennis instead?”

He was relieved to hear the answer, which led him to a decorated four-year career playing tennis at Highland Park. After all, his family’s rule was that you had to play a sport — not necessarily football.

“I thought being in a football family meant I had to play football, but it didn’t,” he said. “I’m not a physical person, and I don’t like a lot of contact. I love watching football. I don’t love playing it.”

So he chose to carve his own path rather than follow in the footsteps of his grandfather, Vince (legendary ex-coach at the University of Georgia); his father, Derek (former head coach at Tennessee and assistant with the Dallas Cowboys); and his older brother, J.T. (a former standout receiver at HP).

“I was not very good at first, but I was very stubborn,” Peyton said. “I did not like my friends beating me.”

As a freshman, Peyton was the last player to make the varsity roster for the Scots, yet won his first of four Class 5A state titles during the fall team season. The next year, he became the top boys singles player at HP, pulled two upsets at regionals, and advanced to the spring state tournament. 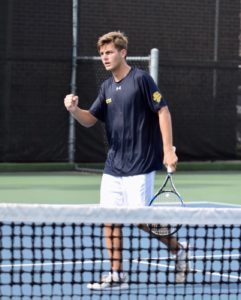 As a junior, he came one step closer to winning the Scots’ first boys singles title since 2006. He rallied twice in a marathon match in the semifinals before falling to eventual champion Brandon Do of Nederland.

“He’s been a very big contributor for us, on and off the court,” said HP head coach Dan Holden. “He’s been very consistent for the last four years.”

Peyton prefers a disciplined, counterpunching style on the court, intended to wear down opponents rather than overpower them.

“I’m definitely a lot better at singles,” Peyton said. “I play pretty defensive and pretty passive, and doubles is more about aggression. I’m not really built for that.”

He was hoping to get a third shot at a singles title this summer until the suspended season was canceled due to the COVID-19 pandemic.

Along the way, the Dooley family has embraced tennis alongside football. Peyton’s younger sister, Julianna, is on the Scots junior varsity squad. Peyton also has managed to thrive athletically despite being a Type 1 diabetic.

“I found my own thing,” said Peyton, who will play at the University of Chicago next season. “I’m so glad I chose tennis.”