One new death – a Dallas woman in her 70s – was also reported.

“Today’s numbers are the highest we have seen so far. I’m hopeful that the medical models will prove correct and we are nearing the peak. Much of that will be determined by the choices each one of us makes,” said Dallas County Judge Clay Jenkins. “Please avoid crowds, maintain 6-foot distancing, and wear a cloth face covering at businesses.”

Many of the cases requiring hospitalization have reported working in critical infrastructure. The county said just shy of 80% of the hospitalizations have reported working in healthcare, transportation, food and agriculture (which Jenkins said at a recent press conference includes places like grocery stores and other establishments where you can buy food), public works, finance, communications, clergy, and first responders. 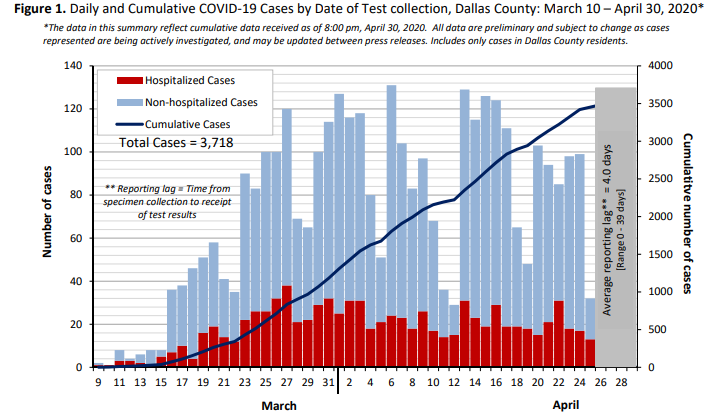 In his evening newsletter, Dallas Mayor Eric Johnson said that 25 hospitals reported their bed availability Saturday. Of the 5,710 total beds, 58% are occupied – which is up by roughly 100 beds compared to last weekend’s occupancy rates. Of the 827 ICU beds available, 63% (or 521) are occupied, compared to 505 last weekend. And 344 of the total 943 ventilators available are currently in use. 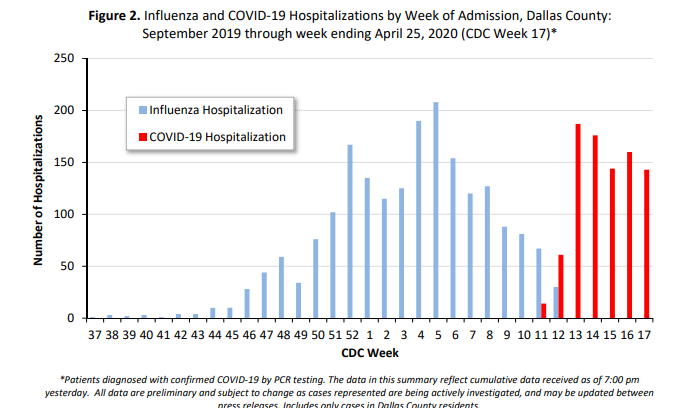 Close contact or community transmission continues to be the biggest risk factor for contracting COVID-19,  accounting for roughly 81% of all cases. Living in a long-term care facility, being incarcerated, and domestic travel are a distant second, third, and fourth, at 6.7%, 5.9%, and 3.2%, respectively.

However, both Johnson and Jenkins have taken pains to point out that less than one percent of the county’s population is being tested.

Twenty-four percent of all cases end up hospitalized – 30% end up in critical care, and 19% end up on a ventilator.

Of the 111 total deaths reported to date, about 40% have been associated with long-term care facilities. Only 26% of those deaths were people younger than 65 – but that number has risen from 22% last weekend with the deaths of two men in their 20s and a 17-year-old girl.

The county does not count recoveries because it’s not a variable being used nationally by the Centers for Disease Control and Prevention, nor by state health departments. However, one can extrapolate that the 76% of total cases that have not been hospitalized – at the very least – are on their way to recovery or have recovered, county officials explained recently.