Dallas County Health and Human Services Saturday reported 181 additional positive cases of COVID-19, bringing the total case count in Dallas County to 3,899, as well as four additional deaths for a total of 110 deaths since the pandemic began.

“Today’s positive cases and deaths close our week. Today’s total for positive cases ranks second highest of the outbreak, eclipsed only by yesterday’s positive cases. Today’s four deaths bring our weekly total to 29. Last week, our daily average of new cases was 84. This week it jumped to 141. We saw a 38% increase in deaths from last week but we lost four less people than we did two weeks ago. As we have seen in each of the last five days, another young person is among today’s deaths.

“All this points to the need to follow CDC and local health department recommendations and avoid crowds, keep six-foot distancing at all times and wear a cloth face covering when visiting businesses, using public transportation, or with individuals outside your household. Before the Governor’s Order opening more businesses, medical models had targeted the next few days as our peak with declines expected in mid-May. Increased activity makes this harder to achieve but it’s still possible if we all make smart decisions and follow the advice of the scientists that have spent their adult lives preparing for this moment,” said Dallas County Judge Clay Jenkins.

About 79% of cases requiring hospitalization who reported employment have been essential workers, with a broad range of affected occupational sectors, including healthcare, transportation, food and agriculture, public works, finance, communications, clergy, first responders, and other essential functions, according to the county.

Most cases requiring hospitalization have been either over 60 years of age or have had at least one known high-risk chronic health condition, officials say. Diabetes has been an underlying high-risk health condition reported in about a third of all hospitalized patients with COVID-19.

Officials say about 40% of the 110 total deaths reported to date have been associated with long-term care facilities. 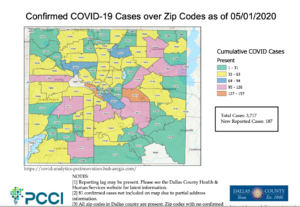 Sheltered Diaries: ‘They Just Need to Know You Love Them’