“Today, we mourn the passing of ten more of our residents. My heart goes out to their families and all who are suffering during this pandemic. Evidence continues to mount that the aggressive move to shelter in place on March 22nd is #FlatteningTheCurve in Dallas County and North Texas. We are in the middle of this fight and we must not waver from the exercise of sound personal decision-making and smart physical distancing. I’m proud of the actions North Texans are taking to protect themselves and #publichealth,” said Judge Clay Jenkins in a statement today. 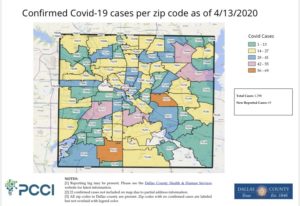 Seven of the ten latest deaths were reportedly from the city of Dallas, along with one person from Garland, one from Mesquite, and one from DeSoto. Half had been living at long-term care facilities. Seven had been hospitalized at local hospitals. Seven were men, and three were women. They ranged in age from 30-something to 90-something. Three had been in their 80’s and three in their 50’s.
County officials reported that the largest case counts were found in Parkdale and DeSoto, both of which had 56-69 cases as of Monday. Areas with the second largest case counts, 42-55 cases, were City of Dallas, Highland Park, Cockrell Hill, and Garland.

Who Was That Masked Man? Another ABC Bank Customer

With Children Living Through History, Have Them Write About It