When the Highland Park Crew Club started in 2002, girls were the first athletes to put their oars in the water.

The club has grown significantly since then, merging its program with Dallas United Crew several years ago, but female boats have remained at the forefront.

Besides providing a viable alternative sport for athletes in the Park Cities, the club aims to enable another avenue to possible collegiate
competition for its members.

“We’ve embraced this opportunity to provide a path for young women to become Division I athletes,” said Steve Perry, director and head coach for the club’s high school programs. 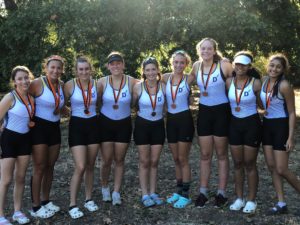 Since 2012, DUC has placed 56 rowers with Division I college programs — boys and girls combined — including half of its 2019 seniors.

HP alumna Genevieve Collins, currently a Republican congressional candidate, was in that first boat in 2002. She went on to compete at the University of Tennessee. More recently, Rachel Craycroft made the roster as a freshman at Texas, which was the national runner-up a year ago.

Crayroft was tall and athletic growing up but didn’t have the right physical tools or aggressive mindset for basketball or volleyball. Her father went to college on the East Coast, where rowing is more popular, and thought she might be a good fit.

Despite never trying the sport until middle school, Craycroft thrived in the rowing environment and won U.S. Rowing Central Region championships with her DUC teammates in four years.

“It’s a different form of competition,” Perry said. “It’s about how hard you can push yourself. There’s a complexity and a dynamic that’s different from other sports. You don’t really have that one-on-one aspect. It’s much more internal as a team.”

HP Crew Club merged in 2013 with DUC, which is based at White Rock Lake and includes athletes from 24 different high schools. Since the transition from a scholastic program to a club program, however, almost half still hail from the Park Cities.

DUC has programs at multiple ages and skill levels, including a robust middle school program for children who get an early start in the sport. At the high school level, newcomers join a novice team to gain experience and compete against other beginners. 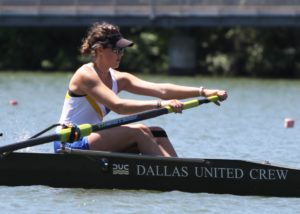 Varsity athletes face a challenging travel schedule in both the fall season and the spring sprint season. In a fiveweek span, DUC planned to take boats to regattas in San Diego and New Jersey, and the Central Region Championships in Oklahoma City. The USRowing Youth National Championships are slated for June in Sarasota, Florida.

On many trips, the local rowers visit college campuses on both coasts and talk with coaches to become acquainted with programs at the next level — many of which have heightened academic expectations, even if they’re not in the Ivy League.

Once they hit the water, they will try to add to the club’s already impressive trophy haul.

Conditions Are Good For Sledding