The positive parenting researcher also is interested in alternatives to “time-out.”

“Everyone knows about ‘time-out,’ but there is some concern among parenting experts that time-out may not be a good technique to use,” Holden said.

Although research has shown time-outs are a useful tool, and Holden sees benefits — for both parent and child to “calm down” and for parents to avoid more “aggressive” discipline — he is pursuing research on whether using “time-in” is effective.

The study trains mothers to use the time-in method. Instead of the usual separation of a child from a parent during a “time- out” — such as being sent to their room alone — “time-in” advocates the child remain near the parent, sometimes on the parent’s lap, or seated nearby. The techniques vary for the age of the child. Still, each focuses on the parent providing an environment for the child to calm themselves, identify the problem behavior, and correct it.

For two weeks, mothers in the study complete daily computerized reports about their discipline practices, with detail given when using time-in and its effectiveness. Holden is also interested in sources of resistance, such as partners.

“The idea was easy to implement, but (I was) just not always able to do so,” said one participant, a busy single mother and full-time sales director at a financial company. The mother to a 2-and 5-year- old was already practicing “peaceful parenting techniques” but took part in the study “to stay current with parenting practices.”

It surprised her how her daughter soon expected a time-in. While playing too rough with her young- er sibling — an ongoing issue — the 5-year-old stopped mid-play, turned to her mom with a “guilty” look, and when asked what she thought her mom was thinking, the child suggested she needed to “come sit with her and think.”

Holden hasn’t systematically analyzed the data from 23 mothers from various socio-economic status and ethnic/racial groups yet. But he is pleasantly surprised with the mothers’ willingness to use such a different approach to discipline and how successful time-in is reported to be. The study hopes to recruit a total of 30 mothers to participate.

Holden is the author of many journal articles, chapters, and books on parenting and discipline, and became interested in the topic in high school while interning at a Head Start Center.

“The range of parental and child behavior that I observed intrigued me and caused me to wonder about how parenting affects children. It is such an important topic that I have dedicated my career to it — both research and teaching.” 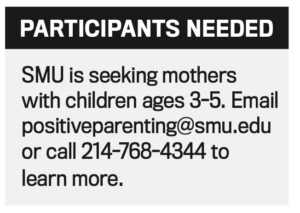 The third edition of his textbook Parenting: A Dynamic Perspective was just published.

Holden created the Parenting Research Laboratory in January 2008 with the goal “to better understand parenting, its effects on children’s development, and how to change parental behavior.”