The memo, which was addressed to superintendent Michael Hinojosa and shared with the board of trustees, said that five schools will offer the full-day pilot program, including Preston Hollow Elementary.

Until now, pre-K was offered for half a day only, serving up to 36 students – 18 in the morning, and 18 in the afternoon.

“We have many working families requesting a full day pre-K class in order to better meet the demands of their families and jobs,” Durant wrote. “Parents have expressed that the inconvenience of having to pick-up or drop-off their child in the middle of the day and arranging childcare for the other half of the day is challenging.

“In some cases, this obstacle prevents the student from attending school regularly or even participating in PreK3 at all.”

Durant said the schools were chosen based on whether they already had a PreK3 program, building capacity, and principal interest.

“The pilot will meet the needs of our working families, increase the number of students that will be kindergarten-ready, and improve enrollment and attendance for PreK3 students, which will eventually increase ADA funding for the district,” Durant added.

Nationally, research indicates that full-day pre-k has better academic outcomes, and better participation because it is more friendly for families with parents who work outside the home. A University of Minnesota study found that children in full-day programs were more literate, had better language skills, and fewer chronic absences.

Locally, a snapshot conducted by Commit Dallas found that students who were in a full-day Dallas ISD pre-k program in 2011-2012 were 3.2 times more likely to be proficient in third grade reading four years later. 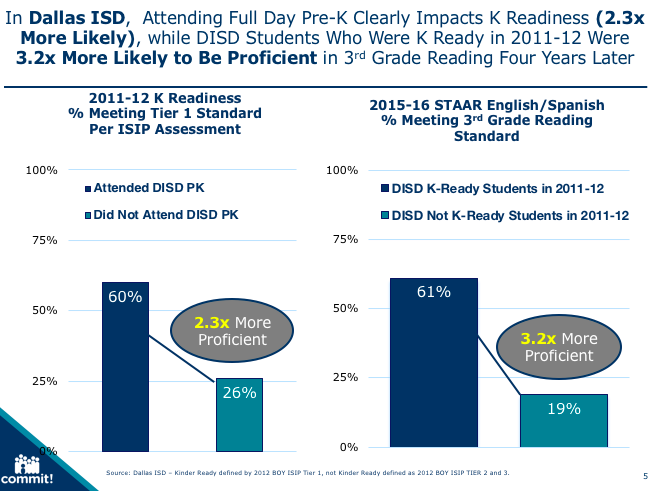