UPDATED to reflect the county’s response to the letter.

In an event that unfolded in public in about an hour, Gov. Greg Abbott has appeared to threaten to take the pop-up hospital at Kay Bailey Hutchison Convention Center from the county in a letter to Dallas County Judge Clay Jenkins that Jenkins said he didn’t even see until a reporter shared it with him.

The letter, which was signed by Abbott’s chief of staff Luis Saenz, says that the Department of Defense or other federal officials had alerted Abbott’s office “that you would not be utilizing the Kay Bailey Hutchison Convention Center for hospital and healthcare use as has been provided by the federal government.”

It further says, “If you cannot make clear the acceptance of these facilities by 5:00 on Monday, April 6th, the federal government may be forced to relocate these healthcare facilities to other regions.”

“I have also been informed that your decision is at odds with the needs and concerns articulated by Mayor Eric Johson – as well as the needs of other local officials in the Dallas County area.”

Johnson took to Twitter after news regarding the letter broke, saying, “I was stunned and deeply disappointed to hear about Dallas County’s position on the pop-up hospital at the City’s Kay Bailey Hutchison Convention Center.”

I share @GovAbbott’s concerns, and I was stunned and deeply disappointed to hear about Dallas County’s position on the pop-up hospital at the City’s Kay Bailey Hutchison Convention Center. (1/3)

But it appears it was all a very big misunderstanding – one that was counter, Jenkins said, to what was actually said.

It appeared that the letter caught Jenkins by surprise – and left him flummoxed as to how the governor got the impression that the county didn’t need the convention center hospital. As recently as Sunday afternoon, county staff was working to assist in readying the facility, and Jenkins is expected to ask the county to approve a budget for wrap-around services for the hospital this week.

“It is essentially untrue,” Jenkins said of the claim in the letter.

Jenkins explained that as best as he could piece together, a routine phone call may have been the genesis for a miscommunication. In that phone call, Jenkins was asked if the county would be placing patients at the convention center by this Monday.

“We have 50% occupancy at our hospitals,” Jenkins said. “We are not going to put people in there just to show the media it’s being used.”

Jenkins said the county’s need for the hospital would likely be in a week or two, as a “step-down” facility where people who no longer were on a ventilator but not well enough to go home would be sent, in order to free up beds at those hospitals for sicker patients.

Jenkins then agreed that some of the staff from the convention center could be sent to New Orleans, where the need is immediate. But at no time did he say the county didn’t need the hospital, a fact he reiterated, he said, in a phone conversation with Nim Kidd, chief of the Texas Division of Emergency Management.

“We need that asset,” he said. “We are working hours and hours a day to stand up that resource.”

Jenkins said that it seems the matter was entirely a miscommunication, but that he knew for certain that someone from the mayor’s office was on that call. He also said he had not received a phone call or text from Johnson to clear up the matter.

“I think what’s happened is the governor’s folks sent the letter, the mayor jumped to the conclusion it must be true, put some things on Twitter,” Jenkins said. “All this was timed to be right before our press conference, so, you know, read between the lines and you can figure out this deal.”

But even more stunning may have been Jenkins’ revelation that Abbott was not in regular communication with the county. Dallas County is regarded as one of the state’s hot spots, just slightly behind Harris County.

“So I did speak to the governor on a conference call with other leaders, imploring him to do safer at home probably two weeks before he did that,” he said, adding that was the last time he spoke to Abbott. “It is different than it was with Rick Perry with Ebola, where we talked every day.”

“I don’t even have his email,” he said, adding that he did feel that he and the governor needed to speak more frequently and that he “welcomed that.”

“I don’t think it’ll take people until 5 p.m. tomorrow to stick a pin in this rumor,” he added. “What I would say to the governor’s chief of staff is I’ve got the same cell phone number that I did when Rick Perry was the governor, and I’d just encourage you to pick up the phone and use it.” 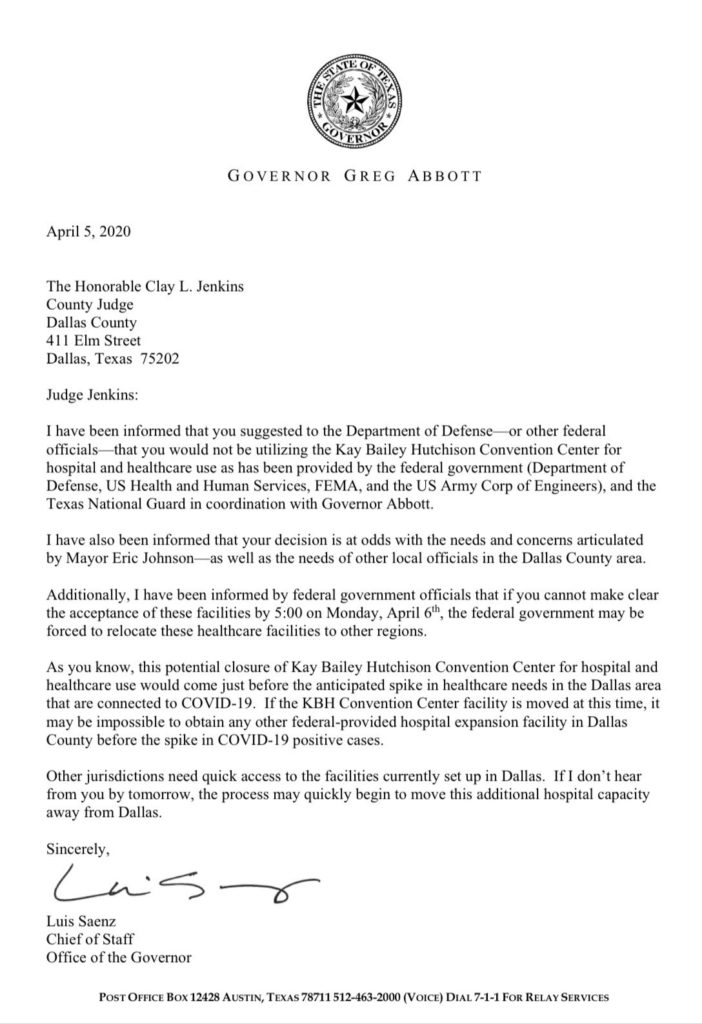