Presley Echols doesn’t recall the details behind her first goal for Highland Park, but she will always remember No. 146.

The first of two goals for Echols during a Feb. 21 win over Carrollton Newman Smith made her the most prolific scorer in the history of the most decorated high school program in Texas.

Echols, who has signed with the University of Texas, broke a 22-year-old mark previously held by former HP standout Meredith Florence.

“I never would have pictured this, but it’s definitely rewarding,” said Echols, who deflected much of the credit to her teammates. “Without them, it would be impossible.”

Last year, Echols surpassed another of Florence’s 1996 records when she tallied 52 goals in a season and led HP to a Class 5A state title. As HP aims for a repeat in April in Georgetown, she’s well on her way to shattering that milestone again.

“The goal is always the same — to win a state championship,” Echols said. 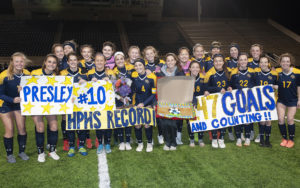 It’s been quite a ride for Echols since she traveled to Georgetown to cheer on the Lady Scots in the 4A state title game in 2012. Her older sister Lauren was a freshman midfielder on that squad, which defeated Byron Nelson in a shootout for the crown.

“It was definitely eye-opening,” said Echols, who was 10 at the time. “The atmosphere was really awesome. I knew I wanted to play soccer for Highland Park.”

She was already a decorated striker for the elite Dallas Sting club program by the time she played her first varsity game in 2017. Echols expected to make an immediate impact at HP, but the transition wasn’t as smooth as she expected.

“I just could not score, and I was so frustrated,” she said. “I had a hard time, maybe because I was nervous. I kept hoping it would get easier, and it did.”

Indeed, Echols bounced back quickly. She capped her freshman season with two goals in the state championship game, which the Lady Scots won 5-3 over Aledo. Echols was named tournament MVP. Moments like that prove that her 10-year-old instincts were right.

“It’s like playing with your best friends,” Echols said. “The fans make it that much better.”