GARLAND — Highland Park needed to start fast in order to upset Lancaster on Friday. The Scots got just the opposite.

HP’s season ended with a lopsided 62-34 loss to the state’s top-ranked Class 5A team in a Region II semifinal at the Culwell Center.

Combine jittery offense from the Scots (27-10) with aggressive defense by the Tigers (35-1), and Lancaster raced to an early 12-2 lead. HP never got within striking distance after that.

The Scots committed turnovers on seven of their first nine offensive possessions. More the nine minutes elapsed between their first and second field goals of the game.

“We had to take care of the ball and we had to rebound, and we did neither,” said HP head coach David Piehler. “Lancaster had a lot to do with that.”

Piehler credited the HP defense for holding the Tigers to just 28 points in the first half. However, the Scots managed just 15 of their own in registering their lowest overall point total of the season. 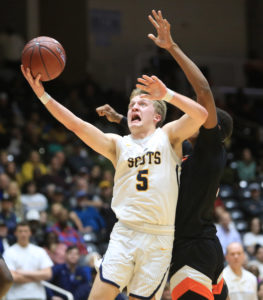 A layup by Prince Dorbah midway through the second quarter seemed to energize HP, yet Lancaster’s speed and size advantage were too much to overcome.

The margin reached 45-25 on a steal and layup by Wade Taylor with 1:43 left in the third quarter, and the Tigers gradually pulled away from there.

Four seniors played in their final game for the Scots, including Drew Scott, who scored nine of his team-high 11 points after halftime. Jacob Hager tallied six points on a pair of 3-pointers, and Dorbah contributed eight rebounds off the bench.

However, HP will return three starters next year — Jack Pease, Mitchell Carew, and Worthey Wiles — from a squad that reached the regional tournament for the third time in the last four seasons.

“I hate that that’s how we ended the season. We picked a bad time to play a game like that,” Piehler said. “If we can get back here [next year], hopefully they can remember this.”