Welcome to our continuous coverage of Super Tuesday, where we will be updating periodically during the day with reports from the field.

We’ll begin a new story as the polls close tonight, and will be updating with returns and more throughout the evening.

Polls opened at 7 a.m. today, with almost a couple dozen polling locations throughout the Park Cities and Preston Hollow. Some, in fact, were next door or across the street from each other, in fact, making it fairly easy (in theory) to skip a line. 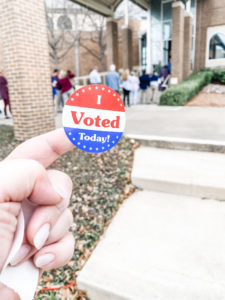 In some locations, it was brisk and efficient with little to no wait – Franklin Middle School had a total of 87 voters by 9:30 – 72 voting in the Democratic primary, and 15 in the Republican. The line at 11:15 at Our Redeemer Lutheran was long, but it took about 20 minutes from the time you entered the line until the time you snagged your new sticker to get through it – it was moving quickly.

And if you didn’t want to wait, the Museum of Biblical Arts was practically across the street, and is also a polling location.

But in other areas, the wheels have fallen off. Preston Hollow United Methodist Church is down (right now) to one machine – two if you count the one for curbside voting. There was a line, but people so far seemed to have packed their patience.

“It’s been like this since this morning,” one poll worker told us. “We haven’t heard from the county about when it’ll be fixed, either.”

When asked if they were sending people next door to Preston Hollow Elementary, she said, “We were told it was closed now.”

However, the school does appear to be open to voters, with at least a couple of campaign workers in the full parking lot. We have an email out to the county to get to the bottom of it.

What is curious is that even though we’ve gotten reports (the Love Field area also had some polling locations with nonfunctioning voting machines, and D Magazine has another rundown here) of numerous locations with machine issues, the map that is supposed to tell you where there are long lines is pretty much all green. 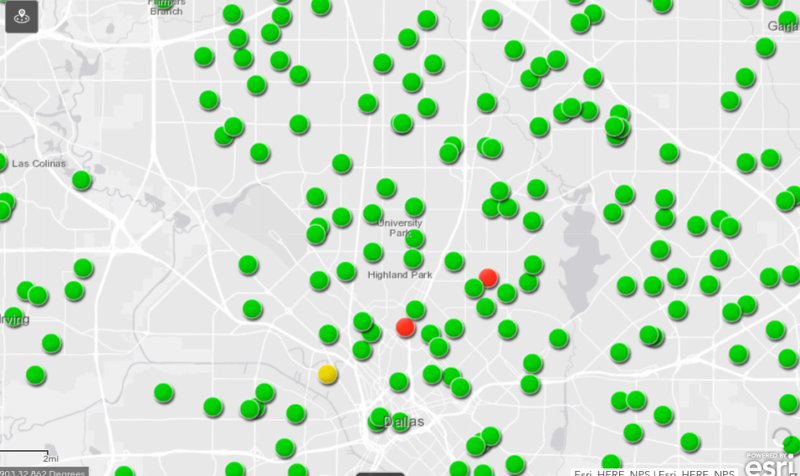 All of this is to say that crowdsourcing the best locations may be your best bet. Go to a location that is jammed up because of too few machines, or nonworking machines? Let me know (bethany.erickson@peoplenewspapers.com) and we’ll pass it on to our readers. Go to a place that was super fast? Also let us know.

“There weren’t lines at the admin building or the church, but there was a small one at the middle school, where the board meeting I went to was, and the combination made parking there super fun!” she reports.

However, by 4 p.m. or so, voters at Preston Hollow UMC told us they had three machines functioning at that point, and they were able to vote relatively quickly. Preston Hollow Elementary was up and running, too, and all the other polling places we stopped at were moving quickly, with a steady flow of voters.

We ended our day at Our Redeemer Lutheran again, where Genevieve Collins was greeting voters among the scrum of various campaign supporters ranging from several of her own, one for Joanna Cattanach, who is running for the chance to face off with Morgan Meyer one more time, one for Bernie Sanders, and a couple of Floyd McLendon supporters (who, along with Collins, is seen as a front runner in the GOP race to win Texas Congressional District 32 from Colin Allred), and a handful of others.

“This is my ninth polling location of the day,” Collins said. “We’re hoping for a big night.”

For up-to-the-minute updates on our whereabouts during the day, check out the Preston Hollow and Park Cities Twitter accounts, and the People Newspapers Instagram account. See something interesting while voting? Let us know at editor@peoplenewspapers.com.

One thought on “Super Tuesday Offers Plenty of Polling Locations”