Highlander Stadium is getting upgrades.

Specifically, the Scot Shop, the area under the main concourse of the stadium at 4233 Grassmere Lane, where Scots sports fans buy spirit wear, is moving closer to Grassmere, so it’s accessible from the street.

The locker rooms, training rooms, and restrooms are also getting updates. 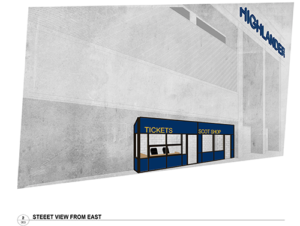 The Highland Park ISD board of trustees approved a guaranteed maximum price of $5.739 million from Lee Lewis Construction for the Highlander Stadium project in January. The project is part of the $361.4 million bond package voters approved in 2015.

“The last renovations of Highlander Stadium took place in 2000, but it was not a complete renovation,” HPISD spokeswoman Emily Conklin said. “Funds were used from a bond election during that time to update the floors.”

The new space for the Scot Shop should be ready for customers by summer. 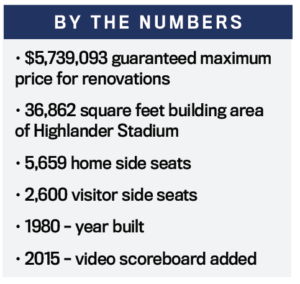 The southwest gate on Douglas Avenue is also unavailable.

Parking is available in the high school’s garage. Visiting teams can also park behind the stadium on Douglas Avenue and enter through the southwest gate.

The football and baseball locker areas, as well as the athletic director, coach, and trainer offices have moved to temporary facilities.

Happenings on the Hill

One thought on “Changes Coming to Highlander Stadium”