A late-night joke among volunteers likening their weeks-long search for an elusive pet to a Seal Team 6 mission provided an odd name for their dog search and rescue effort.

Deciding ducks were more fitting than seals, the rescuers called themselves Duck Team 6 and the hundreds of loose dogs saved as “Duck Dogs.”

“It’s just an amazing group of people that are out really trying to help this situation in terms of loose dogs and education in the community,” said Lori Stone, president of a five-member board that leads about 50 volunteers.

Preston, wandering near St. Mark’s School of Texas with a leash dragging behind him, was shy at first and rejected Preston Hollow residents’ help. When Preston’s leash tangled in the school gate, he tore down the lock to free himself.

“It’s very satisfying to get these dogs off the street.” -Lori Stone

But helpful neighbors Bill and Tommy monitored his whereabouts.

During several weeks of stymied stakeouts, DT6 learned his eating patterns. After Preston entered an enclosed feeding station for his 4 a.m. meal, volunteers took him to a foster home.

Fate connected Stone with Sully, a 4-month-old abandoned puppy tied to the door of a Pet Supplies Plus, where a DT6 volunteer was picking up donations. By the time Sully met Stone, she knew she had to adopt him.

When a volunteer learned that the most dog-related Dallas Animal Services citations were in a South Dallas neighborhood, DT6 expanded its mission. An outreach program helps low-income and homeless families care for their pets by distributing 3,000 pounds of dog food monthly through SoupMobile, sponsoring vet care, and providing fencing and dog houses.

“This is such a passion of all of ours to help with this dog issue in any way we can.” Stone said. 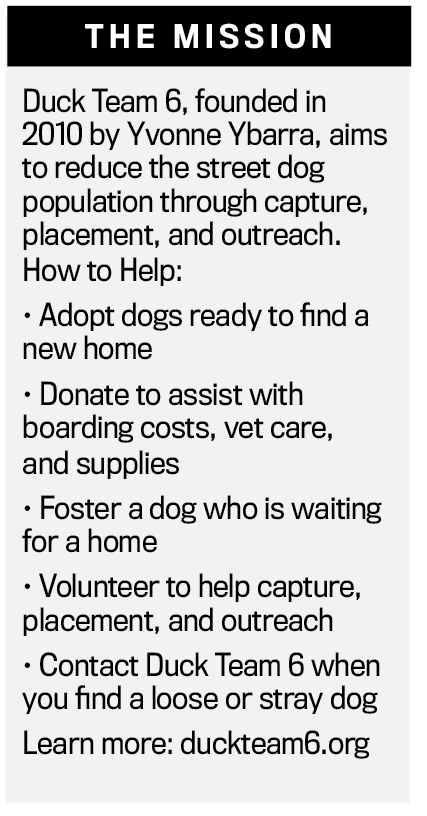 DT6 relies on the help of neighbors who alert them to loose dogs, many in dire circumstances like Coco, a lab mix with a calm disposition who sustained severe injuries, or Bear, a timid cattle lab mix found emaciated.

Search and capture missions can take months, requiring unrelenting attention and dynamic tactics. Owen was near-death when volunteers trudged through miles of mud carrying him to safety near Trinity River Audubon Center.

Once a dog is finally secure, it gets time to decompress and stabilize in a foster home. That break is crucial for recovering from a state of anxiety and heightened awareness on the streets.

When ready to be adopted, dogs and homes with DT6 partner rescues in Dallas like Cane Rosso Rescue, Take Me Home Pet Rescue, and Dallas Pets Alive, or out of state organizations such as Longmont Humane Society in Colorado and Southwest Washington Humane Society in Washington.

Stone said, “It’s very satisfying to get these dogs off the street,” and particularly rewarding when she witnesses a happy ending, like in the case of pregnant Lucky, who coincidentally delivered eight puppies the day of her rescue.

Four Things You Should Know Before You Decorate Your First Home