Coming to Dallas on March 14, American Mariachi tells the story of Lucha, who dreams of having her own mariachi band, defying cultural standards of the 1970s. She forms an all-girl mariachi band, dodging naysayers and critics. 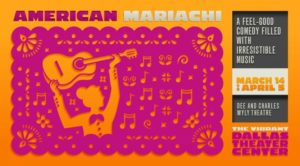 Described as a comedic tale about “family, progress, and the freedom to dream big that will send your heart soaring and put a bounce in your step,” American Mariachi will feature live music and will play at Dee and Charles Wyly Theatre.

In honor of American Mariachi’s presentation, the annual Dallas Theater Center Guild Salon will hold a dinner and panel discussion on Monday, March 2, at 6 p.m. at the Latino Cultural Center.

Festivities will begin with an art gallery tour of The Dreamer/Parallel Universe: The Works of Armando Sebastian, a Dallas-based Latinx artist whose works blur the lines between dreams and reality and focus on the 1990s.

The event is chaired by Mickie and Jeff Bragalone, DTC Board of Trustees President.