University Park residents see signs of the city’s traffic operations department’s work all the time but may not realize it.

Unlike most cities its size – population of 22,910, according to the 2010 Census – University Park makes signs in-house instead of purchasing them elsewhere, spokeswoman Paige Ruedy said.

“The consensus is that, overall, it’s pretty rare,” Ruedy said.

The town of Highland Park, for example, buys its signs.

Other mid-sized cities in the area that make their traffic signs include Addison, Carrollton, and DeSoto. SMU uses Fastsigns now, but University Park previously made them.

“(Inevitably) someone will knock a sign down.” -Fernando Zavala

The city’s traffic operations department includes seven people and a supervisor in the Peek Service Center on Worcola Street.

“We make decals for the police cars, and all city vehicles and service vehicles aside from (fire trucks),” said Fernando Zavala, who’s worked for the department for 14 years.

To make the signs, employees utilize a computer program loaded with hundreds of pre-programmed templates.

They also have a book, the Manual on Uniform Traffic Control Devices, that specifies details such as the font each sign needs to use, the size the sign needs to be, spacing, kerning, and more.

The signs are made using 3M diamond-grade sheeting that’s adhered to aluminum. A plotter scores the design for the signs in the sheeting, and employees finish cutting the design out by hand.

“It’s the most reflective sheeting on the market,” said Randy Brown, who’s worked in the department for 23 years.

Employees then use a pressure roller to adhere the sheeting to the signs. 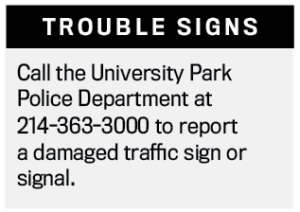 Brown said signs last about seven years. Workers keep a stockpile of the various ones and produce about 15 per week. Crew members also are responsible for maintaining pavement markings, which takes up most of their time, and the decorative street signs along Hillcrest, Snider Plaza, Preston, and Lovers Lane.

Signs are replaced as needed. “(Inevitably) someone will knock a sign down,” Zavala said.

The Sky’s No Limit For Nick Vujicic

Stuck on a Room Design? Follow These Four Steps to Find Inspiration