University Park Mayor Olin Lane Jr. Feb. 13 discussed upcoming projects, including large-scale ones like those at Snider Plaza and the ‘Miracle Mile,’ during his state of the city address.

Lane said the infrastructure in Snider Plaza, the longstanding shopping center at Hillcrest and Daniel avenues, for utilities was built in 1926, and city officials are planning major improvements to the infrastructure, the landscaping, and parking situation in the plaza. 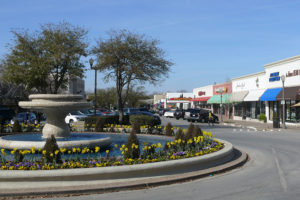 “We are in the process and we have the engineering studies being done now to upgrade all the infrastructure in Snider Plaza,” he said. “We also have several design concepts going for improving the landscape, improving the parking… We have met individually with a number of the owners and merchants out there, and so far, the acceptance has been very good to what the initial plans are.”

Lane added that the plans for the shopping center aren’t finished and are ongoing.

As for the other major retail area in the city, the ‘Miracle Mile,’ a stretch of Lovers Lane between the Dallas North Tollway and Douglas Avenue, he said city officials came up with a concept plan that City Manager Robbie Corder estimated would add about 17 new parking spaces there.

Lane said the city hopes to hear back from Dallas County regarding a possible partnership on the ‘Miracle Mile’ project in March.

“Basically, the funds from the county would cover about half of the operation,” he said.

“This is a major re-doing because all the water and sewer in Lovers Lane has to be re-done also and the paving is atrocious there,” Lane said.

He said the city bought the northeast corner of Lovers Lane and Douglas to allow officials to move the north side of Douglas to the east so it better aligns with the southbound part of the street and allows for dedicated left-turn lanes in every direction there.

Lane said the city council and park advisory committee have reviewed initial concept plans for a potential park at the northeast corner of Lovers Lane and Preston Road.

The property was donated by Bill Shaddock for use by the city as a park.

“When the park is done, (Shaddock) intends to dedicate the land to the city of University Park as a park, which will really enhance that intersection considerably, open it up, better visibility…it does have a small fountain in it, so it will be very, very attractive,” Lane said.

He hopes installation for the park will happen this summer.

(Note: This story has been updated)

The Case of the Missing Camp Trunk