Keren and C.J. Martin, Dallas-based owners of the luxury hospitality brand Ketsali, are gearing up to host a Latin-flavored art auction, all as part of a promise they made in December to help Dallas ISD recover from a devastating EF3 tornado that severely damaged three schools.

The two launched their brand at a glitzy party at de Boulle Diamond & Jewelry. They announced there, with Dallas ISD school board president Justin Henry and trustee Edwin Flores, as well as Dallas Education Foundation executive director Mita Havlick, that they would raise $50,000 for the foundation’s tornado relief fund.

“We want to start in our own community by helping the DISD schools affected by these devastating tornados,” Keren said.

A total of 10 Dallas ISD schools were impacted by the Oct. 20 tornado, with three – Thomas Jefferson High School, Cary Middle School, and Walnut Hill Elementary – receiving the brunt of the destruction. 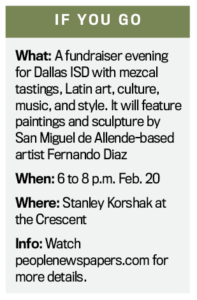 The Martins also said they would personally match the funds raised from their hospitality events that feature art, sculpture, and cuisine from Martin’s native Mexico. They began their company, they said, to combine their love for community-building and their love of Latin American culture.

The brand will officially open this Spring.

“It is our goal to build a hospitality brand while building a sense of community locally and internationally,” said C.J.