The University Park City Council Feb. 4 approved a license agreement with the Plaza at Preston Center to allow the shopping complex to make sidewalk and parking improvements along its Preston Road frontage.

Public Works Director Jacob Speer said the owners of the shopping center in the 8300 block of Preston Road plan to ‘re-do’ several parking spaces and sidewalks on the east side of Preston Road from Wentwood Drive to just north of Villanova Street.

“What they’re proposing to do is move those parking spaces a little closer to Preston Road than they are today and that would allow for several enhanced amenities — it would allow for greater accessibility on the sidewalks both to parking spaces as well as greater accessibility… up against these storefronts,” Speer said. “It will also enhance the safety of the Preston and Villanova intersection by moving these parking spaces closer to the road… that has the effect of shortening the crossing distance for pedestrians trying to cross Preston Road and that shortened distance and the enhanced visibility… makes for a better, safer configuration.” 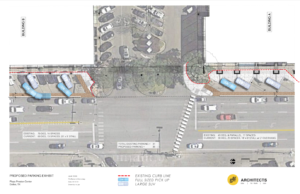 Speer said the agreement specifies that the shopping center would be responsible for constructing and maintaining the improvements.

Speer said the ownership of the shopping center is confident a proposed 5-foot-wide buffer of brick pavers to separate the area between the travel lane and parking spaces can be increased to seven feet to better address concerns about the impact to traffic on Preston Road.

“(This) would allow cars parked there to back out, see cars coming, verify that it’s clear before the rear of the car is extended into the travel lane (on) Preston Road. It also lets those Preston Road motorists know that a car is backing out,” he said.

The proposed layout reportedly provides a net increase of five parking spaces and ADA accessibility on both street and retail levels.

Fourth of July Parade is Friday!