You wouldn’t know it these days, but Dawson Dabboussi got a late start as a catcher.

Her relatively quick study of the sport — and her position — has the Highland Park senior poised to lead a team with the experience to match its high expectations this season. She’s among six seniors returning from a squad that reached the second round of the playoffs a year ago, and many of those already have been in the starting lineup for multiple seasons.

“She’ll be really important, especially behind the plate,” said HP head coach Michael Pullen. “Her game knowledge is amazing. She very rarely makes mistakes. She catches and blocks everything.”

“You have to be very vocal, and you have to know where the play is going.” -Dawson Dabboussi

Dabboussi began playing softball as a corner in elder before shifting to catcher late in her eighth-grade year at the urging of her coaches on the HP Bombers select team. They saw an upcoming void at the position on HP’s varsity squad and thought she should fill it.

Dabboussi did just that as a freshman, enduring some growing pains that have paid dividends entering her fourth year as a starter.

“It was a big responsibility. I was kind of scared because I had never done it before. I caught on quickly and began to love it,” Dabboussi said. “You have to be very vocal, and you have to know where the play is going.”

Dabboussi’s leadership includes plenty of encouragement and positivity when her teammates are struggling. Perhaps that stems from personal experience. Dabboussi returned to softball as a coping mechanism after her mother, Kim, died from breast cancer when she was 5. 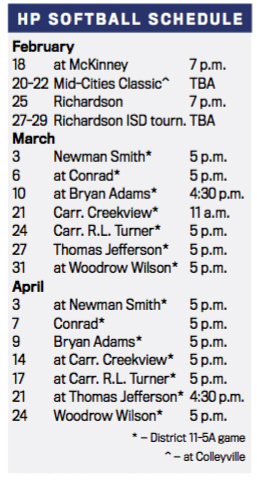 “It was a way for me to be happy,” said Dabboussi, who still wears a pink headband during most games in her mother’s memory. “She’s always been with me.”

In November, Dabboussi signed to play college softball at St. Edward’s University in Austin. She became the first Lady Scots player to earn a softball scholarship in almost two decades.

“These girls have a lot of experience, and they know what it takes to get there,” Pullen said. “A district title is definitely within reach.”