If you’ve ever strolled past a bakery as loaves come out of the oven, you know the irresistible draw of freshly-baked bread.

I’ve been privileged to know three master bread bakers. Two are famous cookbook authors – Rose Levy Beranbaum of The Bread Bible fame, and Peter Reinhart, author of Bread Revolution and The Bread Baker’s Apprentice. The third never wrote a book and is known only to his friends and family.

Al was a neighbor and dear friend, and I always called him “The World’s Best Bread Baker.” Until recently, Al and his wife Liz lived next door to us in Colorado. I learned of Al’s bread baking prowess soon after Randy and I purchased Swan’s Nest – our historic 1898 home. We were deep into the house restoration process when we received a dinner invitation. That was the night we realized dinner next door would always be a culinary feast.

Making yeast breads in Dallas is a fairly straightforward process. Still, when the challenges of baking at high altitude are thrown into the equation, even the most accomplished baker can encounter less than stellar results. Al had the process nailed. Whether he was baking ciabatta or a huge multigrain bread garnished with whole grains and seeds, each loaf had a beautifully crisp exterior and a perfectly balanced soft and chewy crumb.

Al often brought a loaf when invited to dinner. His bread was a gift I always treasured, but Al’s greatest gift to me was a private bread-baking lesson in his kitchen on a snowy winter day. I learned about proportions of whole wheat flour to other grains, how to overcome high altitude’s dry atmosphere so the texture isn’t dry, his secret to a crisp outer crust, and a solution to a problem I had already experienced – placing a sheet of greased plastic over the dough before the towel so the dough won’t dry out while rising.

January’s cold and blustery days offer an ideal setting for bread baking. After the Holiday festivities, a quiet day of mixing and kneading dough, seeing it rise, inhaling its intoxicating aroma as it bakes, and biting into that first warm slice, is a welcome respite from December’s intensity.

The whole grain recipe I’ve developed here requires no special equipment and features easy steps that even a novice bread baker can accomplish with confidence. That first taste… heavenly! 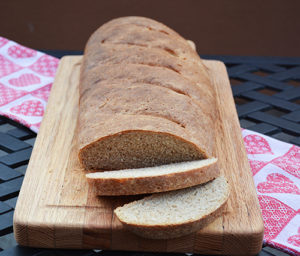 Directions:
In the large bowl of an electric mixer fitted with a dough hook or in a large mixing bowl, stir together the flours, oats, brown sugar, yeast, and salt. Pour in 1¼ cups of the water and oil and mix on slow speed. If the dough feels dry, add remaining water, a little at a time, to form a soft dough. Turn the dough out onto a lightly floured surface and knead until it is smooth and bounces back when pushed with a finger. Transfer it in a greased bowl, turning it over once to grease the surface. Cover with plastic wrap that has been sprayed with nonstick cooking spray and a light towel. Place the bowl in a warm place until the dough has doubled in size, about 45 minutes.

Punch down the dough, gather in the edges, and transfer it to a lightly floured surface; knead 1 minute. Roll it out with a rolling pin to a 13 by 11-inch rectangle. Tightly roll the dough with your hands into a log, seal the bottom edge, and turn the ends under. The log should measure 12 by 4 inches. Place it on a greased cookie sheet, cover it with greased plastic wrap and a towel, and set it aside in a warm place until it is doubled in size, about 30 minutes.

Preheat the oven to 425 degrees and place an empty baking pan on the bottom rack. Using a sharp knife, cut 5 to 6 slits across the top of the loaf. Drop a handful of ice cubes into the empty baking pan to create steam, and bake the bread on the middle rack for 12 -15 minutes to brown the crust. For an extra-crisp crust, spritz the bread with water every 5 minutes. Reduce the temperature to 350 degrees, cover the bread with a tent of foil if it begins to brown too much, and bake 15 – 20 minutes more, or until an instant-read thermometer reaches 210 degrees when inserted into the middle of the loaf. When it is done, remove it from the oven and transfer the bread to a rack to cool.

Public television chef Christy Rost is the author of three cookbooks and a longtime resident of the Park Cities and Preston Hollow. For additional recipes and entertaining tips, please visit christyrost.com or follow her on Facebook and Twitter @ChristyRost.

2 thoughts on “Homemade Bread Rises To The Occasion”