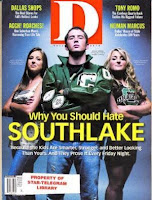 Here’s why we should still hate them, they don’t have an Ace-ish fee. For now. But it’s hard to hate the speedy and super frank response from the Carroll ISD communications peeps.

CISD used to have a student activity fee that was charged only to students involved in our athletic program. Yes, it was mandatory at that time. The Board did away with that fee a couple of years ago. At that time, the fee was $100 for students in grades 9-12 and $50 for students in grades 7-8. The money went into the general operating fund and was collected of every student in athletics regardless of participation or playing time. Each student paid only one fee – not a fee per sport.

The district’s Budget & Finance Committee recommended doing away with the fee a couple of years ago when the district’s budget was more stable. Since that time, we have begun to endure cuts again and are operating on a deficit budget. The School Board has discussed resurrecting the activity fee, but have not done so at this point. There has been much discussion about broadening the scope of the fee to include other student organizations and groups and not just athletes – to be fair. No decisions have been made to reinstate the fee.

Don’t Be Alarmed By Military Helicopter

15 thoughts on “Another Reason to Hate Southlake”